Home » Uncategorized » There is only one thing wrong with this letter,

it is not the African American community that is instigating or, for that matter, really cares about statues or flags no one pays attention to or even know exist. In fact, anyone who believes they are going to feel better by denying history should see a doctor. The letter does raise some of the real problems that only fools believe will be fixed by what our last President intentionally exacerbated and only bigger fools believe that is the goal of hired protesters. 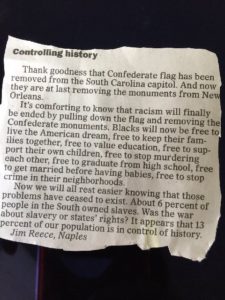 It is a real letter to the editor.

Thank goodness that Confederate flag has been removed from the South Carolina capitol. And now they are at last removing the monuments from New Orleans.

It’s comforting to know that racism will finally be ended by pulling down the flag and removing the Confederate monuments. Blacks will now be free to live the American dream, free to keep their families together, free to value education, free to support their own children, free to stop murdering each other, free to graduate from high school, free to get married before having babies, free to stop crime in their neighborhoods.

Now we will all rest easier knowing that those problems have ceased to exist. About 6 percent of people in the South owned slaves. Was the war about slavery or states’ rights? It appears that 13 percent of our population is in control of history.