Home » Uncategorized » Beyond the ‘peel’

Here’s the deal. Someone in authority like Donald Trump has to say, “Enough is enough”. Anyone who can be “triggered” (and someone please tell me what that means) by a banana peel needs to separated from society because they are separated from reality. Someone needs to tell these people to GROW UP rather than for one minute acknowledge behavior that can only be described as idiotic. This matter is compounded by the action of the school wherein they canceled the event because of this idiotic hysteria. The administrator or administrators responsible for the capitulation should be fired and the CHILD who was triggered should be sent back to kindergarten where she belongs. However, before these infantile, social justice, snowflakes are sent packing someone needs to tell them, You, sir, are an idiot. 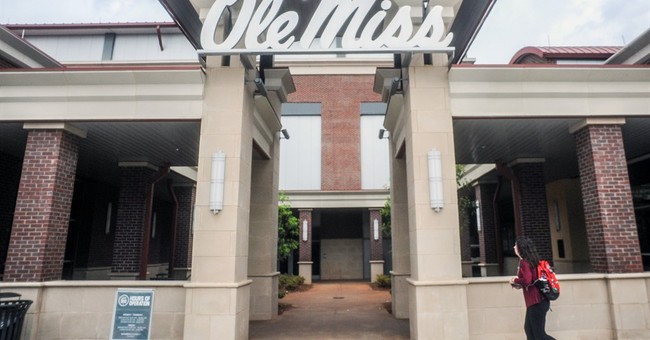 There is a raging controversy within the University of Mississippi’s Greek Life community regarding race relations and bananas.

A Greek Life leader accidentally sparked mass hysteria after he placed a banana peel on a tree in the woods — because he could not find a trash can.

The Daily Mississippian reports that three black students found the banana peel — and were apparently triggered by what they saw.

“To be clear, many members of our community were hurt, frightened, and upset,” the interim director of fraternity and sorority life wrote in a letter obtained by the newspaper.

The president of one sorority told the newspaper that “bananas have historically been used to demean black people.”

It’s unclear how many were triggered by the banana peel – but the fear and trepidation was so great that a meeting was convened at the campground. The Daily Mississippian described what happened:

“The massive discussion session wrapped up as more and more students stood and left the room – some in tears, some in frustration. NPHC members began texting friends to come and pick them up from the camp since no one had been allowed to drive his or her car up to the retreat. The remainder of the retreat was canceled later that night,” the newspaper reported.

It sounds as if terrified Ole Miss students were stampeding through the woods weeping and wailing as they sought psychological refuge from the banana peel.

An Ole Miss spokesman confirmed there was some sort of incident.

“We are aware of the situation and are working to address it through appropriate channels,” the spokesman told me. “Since we became aware of what occurred at the fraternity and sorority community’s retreat, UM staff acted quickly in an effort to engage in discussion with students.”

Does that mean Ole Miss will ban racially-offensive fruit and vegetables from campus dining halls? Has there been a call to banish banana nut bread or ice cream sundaes or heaven forbid – banana pudding?

The young man who discarded the banana peel – profusely apologized and said he meant no harm – but I doubt it’s going to make much difference.

“I want to sincerely apologize for the events that took place this past weekend,” the student wrote in a letter to the newspaper. “Although unintentional, there is no excuse for the pain that was caused to members of our community.”

In retrospect – the young man would have been better off just tossing the peel on the ground. It’s better to be a litterbug than to be falsely accused of being a racist.

I imagine the only thing that could have possibly been more offensive — would have been eating the banana while watching Gone with the Wind.