Home » Uncategorized » Bring out the fools who put their faith in MEN (government). Bring them out.

You honestly believe your government gives a crap about you? You are a fool. It is absolutely stunning how willfully ignorant people choose to be. And it all stems from believing that man is inherently good rather than one of the first truths revealed in the bible in Gen 6:5 – EVERY inclination/imagination of a man’s heart IS to evil ALL the time. The below is not hearsay, speculation or conspiracy theory, it is hard cold fact proved by cold hard documents generated by and kept hidden from the public by that same government so many put their faith in. LEt us return to Genesis 6″5 for a moment. The plan of the government is certainly proof one that it is true, the deception is proof two, the hiding or the proof for over fifty years is proof three but by far the greatest proof is that given the irrefutable proof the majority of Americans still trust their government and the idea that similar activities take place on an almost daily basis by only different players in similar positions of government NEVER even occurs to anyone. Those that dare suggest that maybe what you see and how it is explained may not be the truth are considered conspiracy theorists and dismissed as kooks even thought they many, many times turn out to be correct. One of the most recent examples is epstein. Anyone who believes he committed suicide is a fool. But, yet, that is the official story with many government men and women SWEARING to it and those who know there is no such thing as coincidence are considered the outcasts rather than the clear liars of the government. There is no better proof of man’s inclination to evil than his willingness to believe a lie. 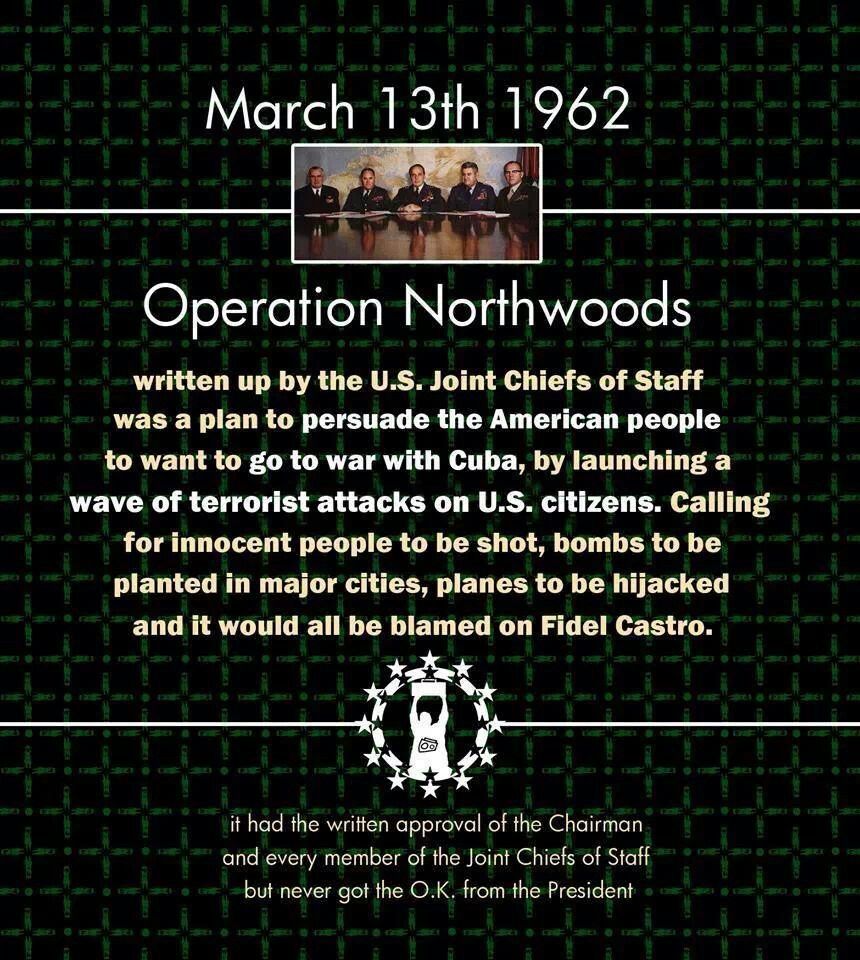 President John F. Kennedy took many actions which upset his war-hungry generals and other top business and mafia leaders. One of the least-known of these was his putting a stop to plans of the Pentagon’s top generals to provoke war with Cuba. The plans were detailed in documents under the title of Operation Northwoods.

Approved by the top Pentagon chiefs, Operation Northwoods proposed fabricating terrorism in US cities and killing innocent citizens to trick the public into supporting a war against Cuba in the early 1960s. The operation even proposed blowing up a US ship and hijacking planes as a false pretext for war.

15 pages of declassified Joint Chiefs of Staff
documents on Operation Northwoods
as posted on the National Security Archive
of George Washington University:

Instructions on how to access 181 pages of
declassified documents from Operation Northwoods
on the official website of the
US National Archives and Records Administration:

The Operation Northwoods documents were approved in writing by the Joint Chiefs of Staff – the top generals of each branch of the US armed forces – and submitted to the Secretary of Defense Robert McNamara. The only reason they weren’t implemented is that the Kennedy administration rejected the plans. Below are key passages quoted directly from the Operation Northwoods documents. Page numbers are listed to assist in finding the quotes on the original documents. As you read, ask yourself if similar tactics to those listed below could have been used in regards to 9/11.

MEMORANDUM FOR THE SECRETARY OF DEFENSE

Subject: Justification for US Military Intervention in Cuba

The Joint Chiefs of Staff have considered the attached Memorandum for the Chief of Operations, Cuba Project, which responds to a request of that office for brief but precise description of pretexts which could provide justification for US military intervention in Cuba.

It is assumed that a single agency will be given the primary responsibility for developing military and para-military aspects of the basic plan. It is recommended that this responsibility for both overt and covert military operations be assigned the Joint Chiefs of Staff.

The suggested courses of action … are based on the premise that US military intervention will result from a period of heightened US-Cuban tensions which place the United States in the position of suffering justifiable grievances. World opinion, and the United Nations forum should be favorably affected by developing the international image of the Cuban government as rash and irresponsible, and as an alarming and unpredictable threat to the peace of the Western Hemisphere.

This plan … should be developed to focus all efforts on a specific ultimate objective which would provide adequate justification for US military intervention. Such a plan would enable a logical build-up of incidents to be combined with other seemingly unrelated events to camouflage the ultimate objective.

A series of well coordinated incidents will be planned to take place in and around Guantanamo to give genuine appearance of being done by hostile Cuban forces.

A. Incidents to establish a credible attack:

(1)   Start rumors (many). Use clandestine radio.
(2)   Land friendly Cubans in uniform “over-the-fence” to stage attack on base.
(3)   Capture Cuban (friendly) saboteurs inside the base.
(4)   Start riots near the base main gate (friendly Cubans).
(5)   Blow up ammunition inside the base: start fires.
(6)   Burn aircraft on air base (sabotage).
(7)   Lob mortar shells from outside of base into base.
(8)   Capture assault teams approaching from the sea or vicinity of Guantanamo City.
(9)   Capture militia group which storms base.
(10)   Sabotage ship in harbor; large fires – naphthalene.
(11)   Sink ship near harbor entrance. Conduct funerals for mock-victims.

A “Remember the Maine” incident could be arranged: We could blow up a US ship in Guantanamo Bay and blame Cuba. Casualty lists in US newspapers would cause a helpful wave of national indignation.

We could develop a Communist Cuban terror campaign in the Miami area, in other Florida cities and even in Washington.

Use of MIG type aircraft by US pilots could provide additional provocation. Harassment of civil air, attacks on surface shipping and destruction of US military drone aircraft by MIG type planes would be useful as complementary actions. Reasonable copies of the MIG could be produced from US resources in about three months.

Hijacking attempts against civil air and surface craft should appear to continue as harassing measures condoned by the government of Cuba.

It is possible to create an incident which will demonstrate convincingly that a Cuban aircraft has attacked and shot down a chartered civil airliner enroute from the United States. The destination would be chosen only to cause the flight plan to cross Cuba. The passengers could be a group of college students off on a holiday.

An aircraft at Eglin AFB would be painted and numbered as an exact duplicate for a civil registered aircraft belonging to a CIA proprietary organization in the Miami area. At the designated time the duplicate would be substituted for the actual civil aircraft and would be loaded with selected passengers, all boarded under carefully prepared aliases. The actual aircraft would be converted to a drone.

The drone aircraft and the actual aircraft will be scheduled to allow a rendezvous south of Florida. From the rendezvous point the passenger-carrying aircraft will descend to minimum altitude and go directly into an auxiliary field at Eglin AFB where arrangements will have been made to evacuate the passengers and return the aircraft to its original status.

The drone aircraft meanwhile will continue to fly the filed flight plan. When over Cuba the drone will be transmitting on the international distress frequency a “MAY DAY” message stating he is under attack by Cuban MIG aircraft. The transmission will be interrupted by destruction of the aircraft which will be triggered by radio signal.

What We Can Do

Remember that many government and military leaders think of this like a chess game. Sometimes you have to sacrifice your own pieces in order to win the game. Zbigniew Brzezinski, former U.S. National Security Advisor and co-founder of the Trilateral Commission, titled his 1998 book The Grand Chessboard: American Primacy and Its Geostrategic Imperatives.

In this seminal book on American foreign policy, Brzezinski states that because of popular resistance to U.S. military expansionism, his ambitious strategy for “American global primacy” can’t be implemented “except in the circumstance of a truly massive and widely perceived direct external threat.” (The Grand Chessboard, page 211).

The report shows that the Bush administration intended to take military control of Persian Gulf oil whether or not Saddam Hussein was in power. [See article in Sunday Herald, 9/7/02 or click here to download the report – Rebuilding America’s Defenses]

Considering the above information, is it beyond comprehension that tactics similar to Operation Northwoods might have been used in relation to the 9/11 attacks in order to create “a truly massive and widely perceived direct external threat?”

Could 9/11 have been the pretext upon which to build a War on Terror in order to “maintain global US preeminence?” Might the 9/11 attacks have been allowed to happen, or even facilitated and manipulated by elements of the U.S. government and military?

We invite you to explore a two-page summary of easily verifiable facts with links direct to major media sources which suggest a major 9/11 cover-up by clicking here. The highly revealing documentary “9/11: Press for Truth” also explores the above facts and much more.

For additional empowering information on these and other reliable resources on the 9/11 cover-up, visit our 9/11 Information Center. We draw no firm conclusions in the resources we provide. We present reliable, easily verifiable facts and information with minimum interpretation, inviting you to draw your own conclusions.

We invite you now to join in making a difference in our world. By spreading this information far and wide, we can help many others to wake up to what is happening. Together, we can build the critical mass necessary to strengthen democracy, and to change this world for the better. We thank you for caring enough to explore this vital information. May we find empowering ways to work together to build a brighter future for us all.

What you can do:

WantToKnow.info is a PEERS empowerment website
“Dedicated to the greatest good of all who share our beautiful world”