Home » Can it get any more stupid? » Another school off the list.

Well, another school has removed itself from contention for the higher education of my children as it has identified itself as not only a bastion of idiocy but also adultless and leaderless as ALL fish stink from the head down so clearly this school has a cowardly squish at its head. It is difficult for me to take seriously any institution that allows the following two statements to be advanced on the student body as serious doctrine-

“Students were also advised to always inform people of their pronouns when they are introducing themselves, even if they coincide with the gender they were born with.”

“Referring to somebody with the wrong pronouns can make them feel just gross, it’s just disrespectful and it makes people feel invalid or invisible, and dismissed, alienated, dysphoric, and a bunch of unpleasant things,” Reyes said

Until we stop encouraging those that deny reality we will continue to see more and more of what can only be described as idiocy. 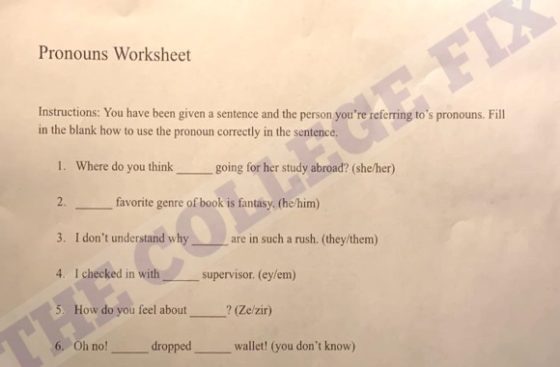 The event, hosted by Wesley Palau, coordinator of SDSU’s Pride Center, and Miles Reyes, part of the Pride Center’s media team, spent time teaching students how to use language that is inclusive of transgender people. It lasted for about half an hour and was sparsely attended.

The speakers started the presentation with a land acknowledgement of indigenous people.

After, students were advised not to use the word “guys” when addressing a group of people, and instead use terms such as “y’all” or “folks.” Another option suggested was “beautiful people.”

Next students engaged in an activity during which they were given various statements regarding pronouns and asked to raise their hands if they agreed or disagreed.

Some of the statements included:

“It is grammatically incorrect to refer to a single person as ‘they.’”

“It is ok to use whatever pronouns you think fits a person.”

The two speakers then provided a large excel-like picture of all the various pronouns a transgender person could have, which included sections for Spanish and indigenous languages.

“Some languages are more gender-neutral and are more able to incorporate gender-neutral pronouns in language, but when that’s not inherently in the system, we make it work…because [language] is meant to evolve,” Reyes said.

Students were also advised to always inform people of their pronouns when they are introducing themselves, even if they coincide with the gender they were born with.

“Referring to somebody with the wrong pronouns can make them feel just gross, it’s just disrespectful and it makes people feel invalid or invisible, and dismissed, alienated, dysphoric, and a bunch of unpleasant things,” Reyes said.

The audience was then given a “pronouns worksheet” on which they could fill in the blanks to various questions about the right types of pronouns to use in different situations.

Palau then went on to compare accidentally using the wrong pronouns to being stabbed with a knife.

“I remember when I was first starting to transition and people would misgender me…It kind of felt like being stabbed, you know, but at the same time you’re being stabbed and you’re hurt, but you have to turn around and tell the person, ‘Oh actually don’t use this knife, I know you wanted to use a pom-pom to massage me or something instead of the knife that they went for.’” Palau told the audience, “It’s like having to do the labor of the emotional work while you’re kind of wounded yourself.”

Later on in the presentation, the speakers noted that people are privileged if they use pronouns that align with society’s view of which pronouns should be assigned to them.

“It is a privilege to not have to worry about what pronouns you’re referred to as,” Reyes said.

They also encouraged those in attendance to correct someone if they hear that person using non-inclusive language, such as “hey guys.”