maybe grocery shopping and you see something like this and your thought is, “well, that’s really too bad, that poor man, perhaps if we pay more in taxes these great politicians we elect can help so I’ll just KEEP VOTING FOR THE SAME PEOPLE, in fact, we will elect even crazier people, people who wish to make sure everyone is San Francisco sees a scene like this at least once a day and someone who believes, ‘“We will not prosecute cases involving quality-of-life crimes,” newly elected district attorney, Chesa Boudin, said. “Crimes such as public camping, offering or soliciting sex, public urination, blocking a sidewalk, etc., should not and will not be prosecuted. Many of these crimes are still being prosecuted; we have a long way to go to decriminalize poverty and homelessness.”” This is a level of sickness that surpasses that of the man defecating in the chip aisle.

It’s no secret that San Francisco has literally become a crappy city to live in, with sidewalks littered with human feces left behind by the homeless, drug-addicted vagrants who call the sidewalks home.

City officials have spent millions to address the homelessness problem, including the addition of 25 public restrooms at a cost of $200,000, but it seems the poop problem is only getting worse.

“.@LondonBreed here’s a pic of a man on drugs taking a poo in aisle 10 of @Safeway Marina Sunday morning in #SF,” health journalist Deborah Kan posted to Twitter. 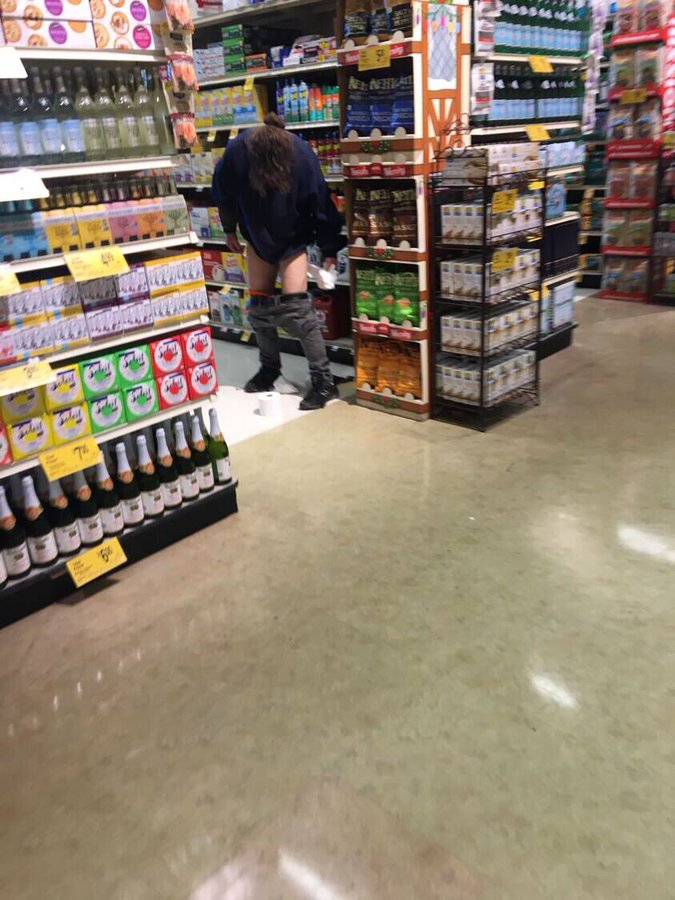 The picture shows a disheveled gentleman in a man-bun with his pants around his knees, feces clearly visible on the floor near a chip display as he prepared to wipe.

“Just curious, are the bathrooms locked for non-customer use?” Randy Treibel posted in response to the image.

“Bathrooms are open!” Kan wrote. “The guy high as a kite.”

Several others who commented noticed that while the man didn’t bother to take his business in the bathroom, he did manage to find toilet paper.

“Had plenty of time to find the toilet paper aisle but not the actual bathroom,” Matt Estrada posted.

“What is most telling here is that this guy had the wherewithal to find the toilet paper aisle, pull out a roll and then yank down his pants,” The Golden Rule added. “So no excuses arguing this guy wasn’t capable of making choices before defecating … he made quite a few choices to get to that point.”

“And yet, SF continues to reject politicians that would fight to stop this in favor of politicians who will do absolutely nothing,” David Herrmann wrote. “You get what you elect.”

In November, San Francisco voters elected radical liberal Chesa Boudin as the city’s newest district attorney based on his promises not to prosecute so-called “quality of life crimes” like public urination, defecation, and camping on the sidewalk, the San Francisco Chronicle reports.

“We will not prosecute cases involving quality-of-life crimes,” he said. “Crimes such as public camping, offering or soliciting sex, public urination, blocking a sidewalk, etc., should not and will not be prosecuted. Many of these crimes are still being prosecuted; we have a long way to go to decriminalize poverty and homelessness.”

Boudin was raised by criminals involved in the Weather Underground, a Communist revolutionary group best known for domestic terrorism in the 1970s, including the bombings of the Pentagon and police memorials, as well as arson attacks.

Boudin’s parents, Kathy Boudin and David Gilbert, were sentenced to lengthy prison sentences for their roles in the robbery of an armored vehicle that left three police officers dead in 1981.

Chesa Boudin was raised in Chicago by adoptive parents Bill Ayers and Bernardine Dohrn, both founders of the Weather Underground who have gone on to become influential in liberal politics.

Chesa Boudin previously worked in the San Francisco Public Defenders Office after graduating from Yale Law School in 2011. Before that, Boudin worked as a translator for Hugo Chavez during his tenure as the Socialist president of Venezuela.