This is the first on a new, i.e. newly identified topic in this blog and not a new topic, series of stupid. The category will be, Diversity is Idiocy, and it will feature articles demonstrating just that. If we are lucky there may even be an answer occasionally to the question, WHAT makes ANYONE think racial quotas make bureaucracies work better? Of course, even asking the question brands one a racist but SO WHAT. The level if idiocy demonstrated by quota thinking, let alone quota mandates, rather than merit based thinking and the lack of understanding that the most qualified for the job make everything better for ALL concerned is more than worth any label especailly when one considers the labelers are the very idiots who think quotas are a good idea.

In 2016, the BBC reported on Amjad Ditta’s appointment as a “positive action coordinator” 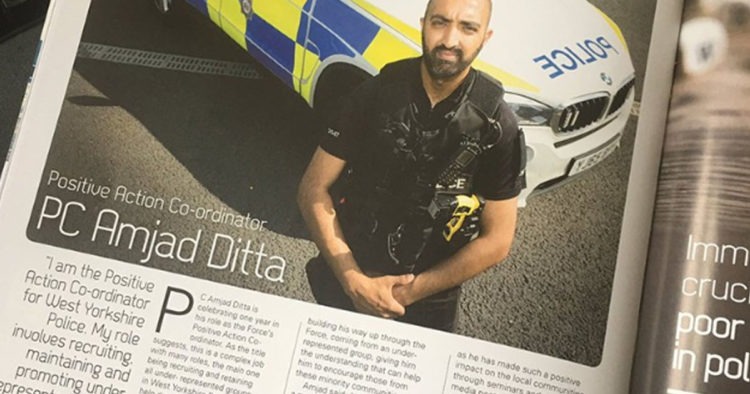 Amjad Ditta, 35, is among 16 men charged with sex offenses against children including rape and child trafficking.

In 2016, the BBC reported on Amjad Ditta’s appointment as a “positive action coordinator” tasked with boosting the numbers of black and minority applicants to the West Yorkshire police force, as part of UK police’s mandate to become the most laughably ineffective law enforcement unit in the Western hemisphere.

West Yorkshire Police has appointed an officer with a brief to boost numbers of Black and Minority Ethnic (BME) people applying to join the force.

The latest Home Office figures show 5.1% of officers in the force come from a BME origin, compared with the national average of 5.5%.

Home Secretary Theresa May has said the proportion of black and Asian officers in the UK was “simply not good enough”.

“I’m interested in people in wanting to know what experiences they have had,” he said.

Black Health Initiative chief executive Heather Nelson applauded the decision at the time: “Don’t just see us as stats, actually see us as individuals who make up a community rather than an issue.”

The children assaulted by Ditta and 15 other men presumably see him as a particularly predatory and monstrous individual.

He and 15 other men are charged with offences against three girls in the Halifax area, dating from 2006 to 2009.

The allegations include several counts of rape, sexual assault, supplying drugs and trafficking.

Mr Ditta, who was attached to West Yorkshire Police’s Protective Services Operations, was a serving officer at the time of the offence he has been accused of.

He has been suspended from duty, the force said.