Home » Uncategorized » Dems have many reasons to fear their continued existence but this has to scare them to death.

There are many very good, valid and TRUE reasons below that have to have the dems scared to death but if you want to know what should really scare them listen to this regular guy being interviewed by a person who doesn’t like the answers she is getting. People like this Baltimore resident have got to scare the dems to death. The dems are left with no option but to hope they can cheat via fraud or vote counting.

We’re looking at the biggest landslide since Reagan so be on the lookout for things that don’t seem to make sense.

Last week former NFL player Jack Brewer declared a “tremendous awakening” is happening in the country as some black Americans are abandoning the Democrat Party and turning to support President Donald Trump.

I’m going to take the guy who’s actually putting in the policies that are going to make life better for my young black son and my young black daughter, versus somebody who gives me lip service — like, unfortunately, the Democrats have done for our community for years.

Brewer’s words are backed up by recent concrete efforts, starting with the Blexit movement, and, now, new polling that shows some black voters are indeed pulling away from the Democrat Party on particular issues as the 2020 election year is upon us.

Five important signs that some black Americans are “awakening” to a break with the Democrat Party are:

1. The establishment of Black Voices for Trump:

Led by co-chairs Hermain Cain, Diamond and Silk, and Pastor Darrell Scott, Black Voices for Trump seeks to “encourage the black community to re-elect President Donald J. Trump by sharing experiences and successes of everyday people as a result of the Trump administration.”

In December, a Zogby Analytics survey found black support for Trump is at the “highest levels of the year,” reported Paul Bedard at the Washington Examiner.

“Not surprisingly, all African Americans do not hate Trump!” said pollster Jonathan Zogby, who, after oversampling black voters in his survey, found not only that support for Trump was at 27 percent, but also that, in match-ups with 2020 Democrat candidates, support for Trump was higher than his 2016 level of eight percent in all cases.

“Against Joe Biden, Trump receives 12% of the black vote. Against Sen. Bernie Sanders, it was 14%,” Bedard noted. “And against Sen. Elizabeth Warren, it was 17%.”

“Those levels are the best for a GOP president or presidential candidate since 1968,” the report noted.

2. Black Americans – like other voters – want jobs and a sound economy that will enable their families to thrive:

In a November op-ed at the Washington Examiner, Vernon Robinson III and Bruce Eberle recalled that, in 1936, the new Gallup Poll found Democrat President Franklin D. Roosevelt received 76 percent of the black vote – just four years after he received only 21 percent from black Americans in Chicago.

How could such a reversal happen in so short a time span? For nearly 70 years, the Republican Party had enjoyed near-monopoly support from black voters. After all, the first Republican President was Abraham Lincoln, who was responsible for freeing the slaves through the Emancipation Proclamation and the 13th Amendment to the U.S. Constitution.

But, much like the Democrats today, the Republican Party of that era took the black vote for granted. The Republicans thought, “How could a black American not vote for the candidate of the Party of Abraham Lincoln?” Or, as a Democrat might say it today, “How could an African American not vote for the party whose president signed the Civil Rights Act of 1964 and the Voting Rights Act of 1965?”

Democrats, the authors observed, made a concerted effort to reach out to the black community. They compared that effort to that of Trump today.

“Clearly, Trump’s attention to black voters, his signing of the First Step prison reform bill, and his policies creating the lowest unemployment rate for black Americans in history have had an impact,” they asserted.

As Breitbart News reported in December, the unemployment rate for black men is at a record low:

The economy added 266,000 jobs in the month, far more than expected. Black men over 20 picked up 14,000 of those jobs, according to Labor Department data released Friday. That matched in increase in the civilian labor force for that cohort.

As a result, the unemployment rate for black men stayed at the all-time low of 5.1 percent hit in October.

And in April, Trump celebrated his prison reform bill victory over the crime laws of the Clinton era that, the president said, “disproportionately impacted the African American community.”

Trump noted that thanks to the First Step Act, more prisons were working to help reform prisoners by getting them job training programs, mentorship, and education opportunities to help them find employment after prison.

“Today, I am announcing that the Second Step Act will be focused on successful re-entry and reduce unemployment for Americans with past criminal records,” he said. “And that’s what we are starting right away.”

Robinson and Eberle added that, as Trump’s policies have helped the black community, Blexit activists and individuals such as recording star Kanye West “have refused to be shamed into silence by the Democrats and the left-leaning news media.” They wrote:

Instead, like their forbears in the civil rights movement of the 1950s and 60s, they have gone on offense, courageously exposing the fact that the policies of today’s Democratic Party are often completely foreign to the values and aspirations of black Americans.

3. More black Americans are condemning abortion:
As the Democrat Party doubles down on its embrace of abortion on demand, and continues to hold up eugenicist Planned Parenthood founder Margaret Sanger as a progressive icon, pro-life leaders say Donald Trump is the “most pro-life president in modern history.”

In November, the Church of God in Christ (COGIC) announced it had unanimously passed a resolution that affirms the value and dignity of all human life and condemns elective abortion.

The Church of God in Christ, a seven-million-member black denomination, unanimously passed a historic resolution affirming the value and dignity of every human life and opposing the practice of elective abortion in America.

A key excerpt from the Resolution on the Sanctity of Human Life reads:

COGIC joined with the pro-life Human Coalition to create the Family Life Campaign, a three-year initiative that serves to save babies from abortion.

In September, New York Times columnist Thomas B. Edsall warned black voters should not be taken for granted.

4. Black Christians are no longer compatible with a Democrat Party that values secularism more than people of faith:

Head and Nelson observed black Americans “are becoming the most conservative constituency within the Democratic Party’s coalition,” particularly where religion and abortion are concerned.

The resolution touted that 70 percent of “religiously unaffiliated” Americans share the values of the Democrat Party.

“The religiously unaffiliated demographic represents the largest religious group within the Democratic Party, growing from 19% in 2007 to one in three today,” stated the resolution.

In a reach for secularists and the nonreligious, the Democrats pointed out:

The DNC further embraced and defended the nonreligious, asserting they:

…have often been subjected to unfair bias and exclusion in American society, particularly in the areas of politics and policymaking where assumptions of religiosity have long predominated.

The Democrats concluded that since “nonreligious Americans made up 17% of the electorate in 2018,” they also “have the potential to deliver millions more votes for Democrats in 2020 with targeted outreach to further increase turnout of nonreligious voters.”

We’re tired of being taken for granted by politicians who don’t reflect our values. The black church has long been the center of the black community. But Leftists are now actively trying to push Christians out of the public square. When they’re not trying to silence us, they’re mocking us or our values.

5. Black Americans have already sharply separated themselves from the Democrat Party on the issue of education:

In November, Florida Angel Mom Kiyan Michael, a member of the Black Voices for Trump advisory board, drew attention to the divide between the Democrat Party and black voters on the issue of school choice.

In a column at the SunSentinel, Michael wrote that school choice programs, such as those Republicans in her state have been putting into effect since the early 2000s, have been a successful way to pull low-income children out of failing public schools.

Moreover, black Democrats have been overwhelmingly supportive of school choice, though most party leaders and 2020 Democrat presidential candidates are not, favoring their relationships with teachers’ unions instead. 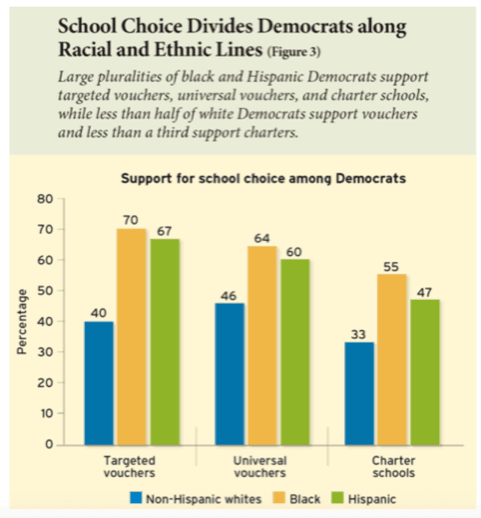 Yet a third poll commissioned by school choice proponents Democrats for Education Reform, and conducted by the Benenson Strategy Group, found 81 percent of Democrat primary voters, including 89 percent of black Democrat primary voters, support a proposal to “expand access to more choices and options within the public-school system,” including charter schools, which are funded with taxpayer dollars but operated by private boards.

Despite these overwhelming numbers in support of school choice in its many forms, Michael observed:

Do-nothing Democrats still call the policy racist because they’d rather that public school teachers win with lifetime employment while black children lose with a lifetime of underperformance and missed dreams.

Trump has also helped the more than 20 percent of black college students who receive their degrees from the nation’s historically black colleges and universities (HBCUs). As USA Today noted in September, “under the Trump administration, federal funding for HBCUs has increased by more than $100 million over the last two years, a 17% increase since 2017.”

During an appearance on Fox & Friends when he discussed the black “awakening,” former NFL star Brewer said, “For me, once I saw the policies that President Obama pushed in the back half of his presidency just — it left a bad taste in my mouth.”

“And then I really started being awakening [sic] to what was happening with the Democratic Party — making so many promises but then abandoning the community that I worked so hard in,” he continued.

“I said enough was enough, and I really started putting aside what my parents and my grandparents taught me about sticking to the Democratic Party because they were the party for African Americans,” Brewer said.