Home » Uncategorized » Another AnD sO wHaT? One has to wonder WHY they even bother?

Senate Finance Committee Chairman Chuck Grassley said Wednesday he is expanding his probe of Department of Defense contracts awarded to Stefan Halper, a former professor who was a confidential source for the FBI in its investigation of Trump campaign associates.

The Iowa Republican said he is investigating the Office of Net Assessment’s (ONA) contract compliance after he reviewed “troubling documents” related to Halper’s contracts.

“Those documents call into question ONA’s stewardship of taxpayer dollars as well as its contract management and internal controls,” said Grassley, who also sent a letter to ONA Director James Baker.

ONA, which is considered the Pentagon’s internal think tank, has awarded more than $1 million in contracts to Halper since 2012 to conduct studies of geopolitical hotspots like China, India and Russia.

The most recent contract was awarded to Halper on Sept. 26, 2016, which was during the same period when the former Cambridge academic was meeting with Trump campaign advisers on behalf of the FBI. 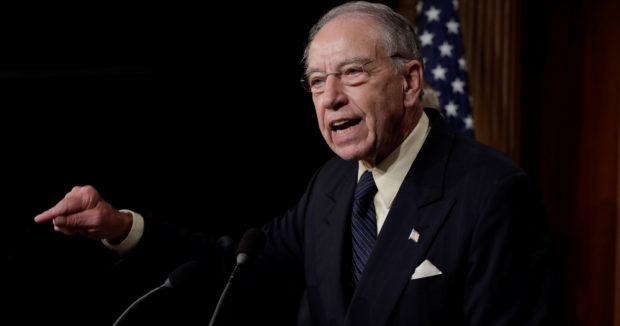 Grassley is questioning whether ONA funds awarded to Halper were used in the investigation of the Trump campaign. He is also questioning whether ONA was aware of Halper’s ties to Vyacheslav Trubnikov, a former director of Russia’s foreign intelligence service, or SVR. (RELATED: A London Meeting Before The Election Aroused George Papadopoulos’s Suspicions)

Trubnikov contributed to a study Halper conducted in 2015 on the relationship between Russia and China, and its impact on U.S. national security.

Halper has also hosted Trubnikov at events at Cambridge University. Christopher Steele, the former British spy, named Trubnikov as a possible source of information for his Trump dossier during an Oct. 11, 2016 with State Department officials.

Grassley asked Baker, the ONA director, whether Halper disclosed his relationship with Trubnikov, and whether information that Halper used from the retired spymaster was considered reliable.

Halper began working as an FBI source in 2008, according to the IG report. He was reprimanded and temporarily cut off as a source in 2011 over “aggressiveness” towards his handling agent, and because of “questionable allegiance” to the target of an FBI counterintelligence probe.

The IG report did not accuse Halper of wrongdoing. But it did criticize the FBI for failing to inform the Foreign Intelligence Surveillance Court of exculpatory information that Page and Papadopoulos shared with the professor during their conversations.

Halper first met Page at an event at Cambridge on July 10, 2016, and the pair remained in contact for more than a year. He met with Clovis on Aug. 30, 2016, and contacted Papadopoulos days later.

Halper invited Papadopoulos on an all-expense-paid trip to London under the guise of working on an academic paper regarding energy issues in the Mediterranean. Halper offered Papadopoulos $3,000 to write a paper on the topic, which the Trump aide accepted.

Halper pressed Papadopoulos in their meetings about his work on the Trump campaign, and whether anyone on the Trump team was working with Russia to influence the election. Papadopoulos told Halper that he was not aware of any coordination between the campaign and Kremlin, according to portions of a transcript released in the IG report.