Home » Uncategorized » Think what you want but it is a good question.

President Trump has been dropping MOABs over Twitter, blasting his enemies for what he called the “single greatest WITCH HUNT In American political history” while nothing is being done about the fact that “Crooked H destroyed phones w/ hammer, ‘bleached’ emails, & had husband meet w/AG days before she was cleared – & they talk about obstruction?”

Trump raised the question as to why he’s being investigated for what he calls “non-dealings” with Russia, while completely ignoring the cozy relationship between the Clintons, the Podestas, and Russian banking and energy interests. 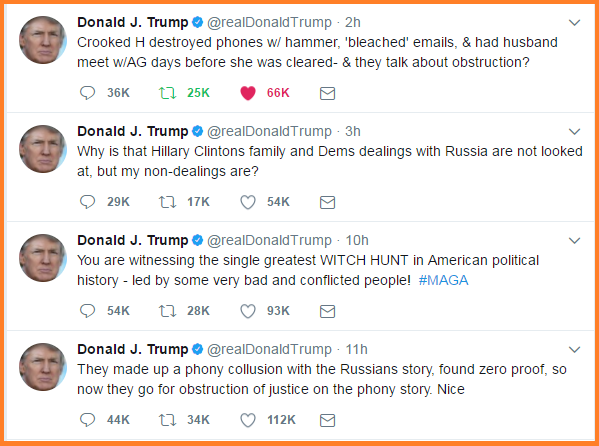 [Trump] seems to have a point on this one.  Last summer, we reported fairly extensively on the Hillary email scandal while it was virtually glossed over by the mainstream media.

And, like many people, we were astonished when FBI Director Comey made the unilateral assessment that, despite Hillary’s “extreme carelessness,” no “reasonable” prosecutor would bring charges against her.

Unlike the current “Russia probe” which has revealed precisely zero tangible evidence, the FBI’s own reports from last summer revealed that Hillary and her staff intentionally destroyed official State Department emails despite confirming they were aware of the existence of a federal subpoena demanding the preservation of those emails (we covered it extensively here:  The “Oh Shit” Moment: Hillary Wiped Her Server With BleachBit Despite Subpoena). 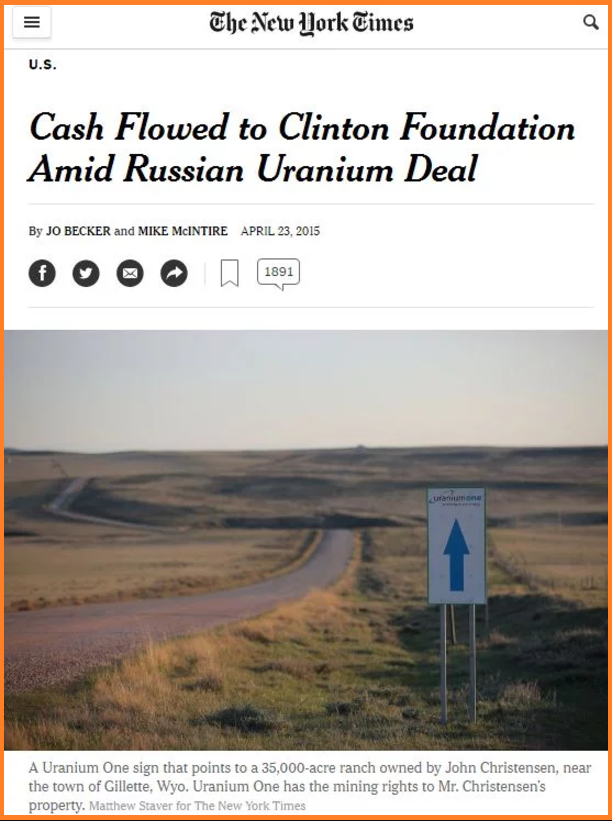 Let’s add a bit more color and review the Clinton’s actual shady ties to Russia. From the NYT:

June 2009, Russian State Nuclear Agency Rosatom (through a subsidiary) takes a 17% stake in Uranium One.

June 29th, 2010, Bill Clinton earns $500,000 for a speech in Moscow to a Russian Investment bank that assigned a “buy” rating to Uranium One stock.

Wait, you say – that Uranium deal had to go through an adviiiisory committee (Michael Savage voice). Know what? That committee is a joke…

“The committee almost never met, and when it deliberated it was usually at a fairly low bureaucratic level,” Richard Perle said. Perle, who has worked for the Reagan, Clinton and both Bush administrations added, “I think it’s a bit of a joke.” –CBS

Clinton failed to disclose the $2.35 Million in donations (made in installments) from Uranium One chairman Ian Telfer to a nebulous slush fund subsidiary of the Clinton Foundation, set up by mining executive Frank Guistra (whose company merged with Uranium One). Guistra donated $31 Million to the Clinton Foundation. How charitable! (read more here in the New Yorker)

Let’s not forget – Russia’s largest bank – Sberbank – paid the Podesta group $170,000 over a 6 month period to lobby against 2014 economic sanctions put in place by the Obama administration:

The two Russian banks spent more than $700,000 in 2016 on Washington lobbyists as they sought to end the U.S. sanctions, according to Senate lobbying disclosure forms and documents filed with the Department of Justice.

The Podesta Group charged Sberbank $20,000 per month, plus expenses, on a contract from March through September 2016.

What’s more – Podesta forgot to register as a “Foreign Agent” while doing so!

So let’s get this straight; White House regular and creepy art aficionado Tony Podesta, brother of John Podesta (who would be Secretary of State today if Hillary had won), took money from the Russians during the US election in exchange for Washington influence.

This is not the first time the Podesta group has taken Russian money:

The Podesta group made $180,000 lobbying for Uranium One (source – you have to add up the years). These donations were made over the same time period that the Clinton Foundation was receiving millions from UrAsia / U1 interests. Tony Podesta also sat on the board (along with senior Russian officials) of a small energy company called Joule. Two months after Podesta joined the board, Joule landed a sweet $35 Million contract from Vladimir Putin’s Rusnano investment fund – which Podesta failed to disclose as required by law. Oh, and before joining the Clinton Campaign, John Podesta transferred 75,000 shares of Joule to his daughter through a shell company with her address. Maybe the optics didn’t look good or something?

Given all that – do you think Hillary and associates would be under congressional investigation right now if she had been elected President?